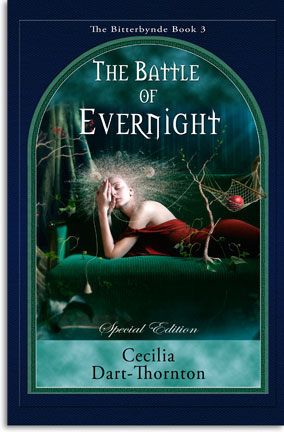 The Battle of Evernight

The fugitive who calls herself Tahquil has at last discovered the truth. She is being hunted down because of the secret she alone knows. Her mind, however, is still clouded by a potent spell called the Bitterbynde, and she is also dying from a strange wasting disease, whose cure is elusive…

Disaster strikes and she finds herself in Evernight – at the fortress of the Raven Prince himself.
Nothing can prepare her for the horror that is Evernight, where magic rules and the sun is banished. In addition, the Raven Prince’s whims shape the weather, the elements, and the very nature of existence. Nonetheless Tahquil refuses to be a mere pawn of these Faeran lords and ladies, who are as merciless as they are beautiful.

As Morragan’s wights and Angavar’s knights become locked in battle that could engulf all of Erith, Tahquil’s quest for the truth finally hinges on a desperate choice.
Above all, if she opens the Gate, will she thereby save two worlds – or instead destroy all and everything she holds dear?
The stunning conclusion to the best-selling Bitterbynde Trilogy, now with an extra chapter!

Crucially for readers, she proves she’s able to bring the unicorn back alive, netted in golden prose . . . ‘

“Not since Tolkien’s The Fellowship of the Ring fell into my hands have I been so impressed by a beautifully spun fantasy. Many fantasies are compared to Tolkien these days but few really have the excellent writing and good characterisation that this work offers. This is far above the usual offering in the fantasy field and the reader is left longing for the adventures to continue.”

About the author:
Cecilia Dart-Thornton was discovered on the Internet. She had written the three books of the Bitterbynde Trilogy before she uploaded the first chapter to a Writers’ Workshop.
An editor spotted her work. Soon afterwards, Time Warner’s publishing arm offered her a contract. They published her books in hardcover, the first time they had ever done so with a new author.
The Bitterbynde Trilogy hit the best-seller lists world-wide and has been translated into five languages.