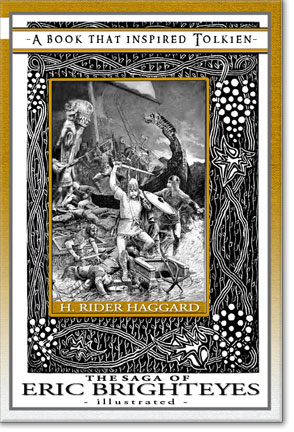 The Saga of Eric Brighteyes

‘Rider Haggard is one of a handful of Victorian and Edwardian writers whom Tolkien acknowledged by name.’

So states Jason Fisher in Tolkien and the Study of His Sources: Critical Essays.

Professor Tolkien once said in an interview, “I suppose as a boy [Rider Haggard’s novel] She interested me as much as anything.” He added with enthusiasm that one of Haggard’s other novels, Eric Brighteyes, was “as good as most sagas and as heroic”.

In The Lord of the Rings, Aragorn has grey eyes, as do most of the elves, while elven hair is described in detail; gold, silver, auburn and dark.

Hair and eye colour was as important to Haggard as to Tolkien. He writes that Eric ‘was strong and great of stature, his hair was yellow as gold, and his grey eyes shone with the light of swords.’

This is one of the many striking motifs in Haggard’s stories that inspired the great work of Tolkien.

He wrote adventure novels in exotic settings, chiefly colonial Africa, where he lived, worked and travelled for several years.

To 21st century readers parts of Haggard’s work may seem ‘politically incorrect’. He was a man of his time, as we are men and women of ours. His books are not devoid of racism, sexism and ruthless exploitation of wild animals; it is best, however, to with-hold judgement and not allow it to spoil the pleasure of reading literary classics.

Haggard’s protagonists, like Tolkien’s, make long journeys, endure painful ordeals, travel underground and are often swept into wars. They encounter beings who are either impossibly long-lived or immortal.

Several of Haggard’s books contain references to volcanoes. Reading them, one is reminded of Tolkien’s descriptions of Mount Doom.

In ‘She’, Haggard depicts marshlands reminiscent of the Dead Marshes in The Lord of the Rings.

Landscape, rock formations and geography play a vital role in Haggard’s adventures, as they do in Tolkien’s work.

You can find out more about which cookies we are using or switch them off in settings.

This website uses cookies so that we can provide you with the best user experience possible. Cookie information is stored in your browser and performs functions such as recognising you when you return to our website and helping our team to understand which sections of the website you find most interesting and useful.

Strictly Necessary Cookie should be enabled at all times so that we can save your preferences for cookie settings.

If you disable this cookie, we will not be able to save your preferences. This means that every time you visit this website you will need to enable or disable cookies again.