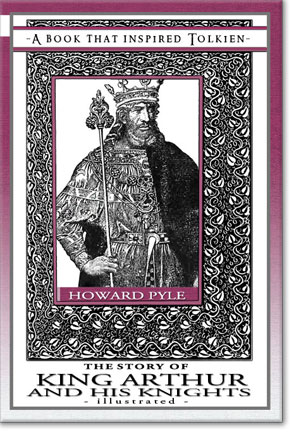 The Story of King Arthur and His Knights

J.R.R. Tolkien greatly enjoyed Arthurian stories, which he called ‘powerful’. It was 1903 when this edition was first published, and young Tolkien was aged eleven. With what relish this imaginative, book-loving boy must have seized upon this new version of the great legend of King Arthur and his knights, complete with captivating illustrations.

So profoundly did the legends of King Arthur inspire Tolkien that a few years before he wrote The Hobbit he began to compose a poem in alliterative verse, entitled The Fall of Arthur:

“Arthur eastward in arms purposed
His war to wage on the wild marches,
Over seas sailing to Saxon lands…”

Wikipedia has this to say about Tolkien and “The Matter of Britain”:

‘The Arthurian legends are part of the cultural heritage that is comprised by the Celtic and Welsh mythologies. Though Tolkien denied the influence … several parallels have been found between the legends and have been well researched by numerous specialists.

In his essay On Fairy Stories, Tolkien spoke about what he was looking for, as a child, when he read a book.

“I had very little desire to look for buried treasure or fight pirates, and Treasure Island left me cool. Red Indians were better: there were bows and arrows … and strange languages, and glimpses of an archaic mode of life, and, above all, forests in such stories. But the land of Merlin and Arthur was better than these. .

“There are similarities between Gandalf and Merlin … comparisons of Frodo and Aragorn with Arthur, Galadriel with the Lady of the Lake, and, very importantly, relevant visible correspondences such as Avalon and Avallónë and Broceliande and Broceliand, the original name of Beleriand.’

Interestingly, the illustrator of this edition, Howard Pyle belonged to the Brandywine School of artists and students. Readers of Tolkien’s works will recognize the name Brandywine or Baranduin River, a waterway in Middle-earth.

To shop for paperbacks, copy & paste 9781925110159 in the search box of your favorite bookstore (see links below). If you don’t see this book at your bookstore, ask them to order it for you.