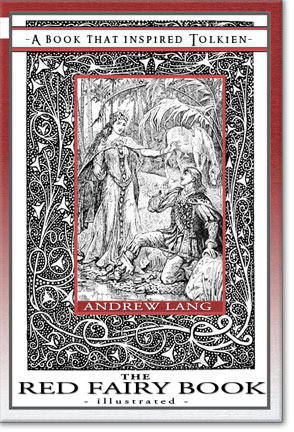 Andrew Lang’s Fairy Books captured the imagination of a generation of children and were sold worldwide in the 1880s and 1890s.

During his youth, J.R.R. Tolkien read and enjoyed every book in the series. As a result, they had a marked influence on his imagination.

‘In English none probably rival either the popularity, or the inclusiveness, or the general merits of the twelve books of twelve colours which we owe to Andrew Lang and to his wife,

‘I have been a lover of fairy stories since I learned to read.’

One of Tolkien’s favourites was ‘The Red Fairy Book’, because it contained one of the most powerful dragon legends in northern literature, that of Fafnir from the ‘Volsung Saga.’

‘The dragon ‘had the trade-mark of Faerie written plain upon him. In whatever world he had his being it was an Other-world. Fantasy, the making or glimpsing of Other-worlds, was the heart of the desire of Faërie.

I desired dragons with a profound desire. . . the world that contained even the imagination of Fafnir was richer and more beautiful, at whatever cost of peril.’

H.J. Ford was a successful illustrator of the fantastical and the romantic.

Lancelot Speed was another famous Victorian artist, best known for his illustrations for the Fairy Books. He drew the pictures for ‘King Arthur and the Knights of the Round Table’ and ‘Eric Brighteyes’, two more stories we know Tolkien admired.

There is no doubt that Tolkien’s love of The Red Fairy Book contributed to his creation of ‘The Hobbit’ and ‘The Lord of the Rings’.

The Professor’s Bookshelf is the home of books that influenced Professor JRR Tolkien.

If you are searching for Tolkien in this book you will not be disappointed. You will find there the source for the name of Pippin for instance, you will find in the stories grains of ideas and themes that later found themselves in LOTR.

But you will find there more than just LOTR references. You will find great stories, some of them a little naive for the cynical reader, but all of them interesting. Even if you are adult, this book will conquer you completely.

This is a book for all the members of the family. You will love it and your children will love it. Some of the stories are suitable for very small children to read to them before bedtime. If you are searching for so called “sophisticated” books, this book is not for you. It contained simple stories, some of them with moral and it is lacking complex motives and emotions, after all, it is fairy tales.

To shop for paperbacks, copy & paste 9781925110081 in the search box of your favorite bookstore (see links below).
If you don’t see this book there, ask them to order it for you.