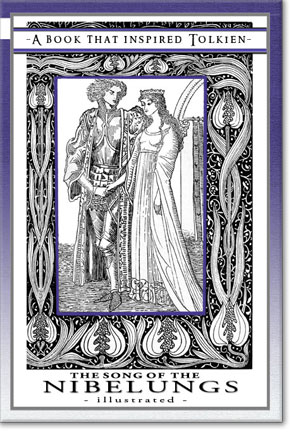 The Song of the Nibelungs
Illustrated

Translator Margaret Armour was the wife of W.B. MacDougall, whose illustrations illuminate the text with their delicate beauty.

In his turn, MacDougall was a friend of famous art nouveau illustrator Aubrey Beardsley, and his own drawings echo Beardsley’s style.

Tolkien was five years old when this beautifully illustrated translation by Margaret Armour was published in England under the title ‘The Fall of the Nibelungs’. The interior of this book is a facsimile of that edition.

Undoubtedly a copy would have made its way into his hands during his boyhood.

Armour uses an archaic form of English to preserve the high-flown style of the original poem. Here and there throughout The Lord of the Rings, Tolkien, too, employs this solemn, dignified and majestic form, which is reminiscent of the language of the King James Bible.

A glossary of antiquated terms is provided at the back of this book.

To shop for the paperback, copy & paste 9781925110036 in the search box of your favorite bookstore (see links below).
If you don’t see this book there, ask them to order it for you.