Leaves of Gold Press publishes and promotes books in digital form. In other words, ebooks! Need a free ebook reader? Find one on our Freebies page.

Over the years, recipes evolve for one reason or another. Sometimes these reasons give their names to a particular dish, such as ‘Half-pay Pudding’ – created by a thrifty cook during hard times. On the other hand, some old-fashioned favourites, like ‘Zeppelins in a Cloud’ derive their titles from the way they look.
The origins of many names are now lost to us, but the names themselves persist in vintage recipe collections handed down from past generations.

These authentic recipes are presented here almost exactly as they first appeared. Toad-in-the Hole, Pigs in Blankets, Gooseberry Fool, Moonshine Pudding, Cock a Leekie Soup, Meat in Ambush, Tuesday Soup, Angels on Horseback, Hedgehog, Black Bottom Pudding…
… these genuine vintage recipes with wacky names are a lot of fun and could provide a talking point at your next dinner-party!

“Mock Turtle Soup” was famously mentioned in Lewis Carroll’s classic tale “Alice in Wonderland”. The recipe for this soup recipe can be found in Mrs. Beeton’s well-loved 19th century cookbook, along with “mock cream” and “mock chicken”.
“Toad-in-the Hole” is a traditional British dish of sausages cooked in batter, but the “mock” version uses cheaper ingredients. Mmm, delicious!
We bring you the best and most outrageous genuine vintage recipes for wartime “Mock” dishes, reproduced exactly as they originally appeared.
Now you, too, can save money and astonish your dinner guests!

PRAIRIE: The true story of the first European child born on the prairie in North West Manitoba, Canada.
(ebook) By P.V. Eyre-Walker

A remarkable historical tale from the pen of P. V. Eyre-Walker, the first European child to be born in the remote wilderness of Manitoba, Canada.

Against the backdrop of the remote prairies, a spectacularly beautiful landscape where the snowbound winters were long and harsh, she and her family struggled against want, sickness and hardship.

Pioneering life on the prairie in the late 19th century was hard and relentless – far different from anything they had ever known.

This authentic autobiography will warm your heart.

In The Ill-Made Mute, a wretched, nameless mute awakens without a memory in a lofty tower upon whose battlements winged horses and flying ships make landfall. The amnesiac longs to escape and roam the wild landscape in search of a past, a name, and a destiny. But the tales the servants whisper by the hearth all turn out to be true. The legendary creatures that plague the world beyond the castle walls are real and innumerable. Travelers in this beautiful, eerie wilderness must beware. . . .

THE LADY of the SORROWS ebook

The Lady of the Sorrows begins with a newly minted lady carrying important tidings to the King-Emperor of Caermelor. In her heart, she longs to encounter the king’s ranger Thorn, but upon reaching the royal court she learns that the ruler and his men have gone to war against the forces of wickedness that are threatening the realms of mortals. As the maiden awaits their return, a dreadful suspicion unfolds. The brutal Lord Huon and his monstrous Wild Hunt are attacking again and again—is she the target they seek?

THE BATTLE of EVERNIGHT ebook

In The Battle of Evernight, the Lady of the Sorrows must save her loved ones from catastrophe by uncovering the secrets of her past. She journeys to the terrible fortress of the Raven Prince in Evernight, despite the Bitterbynde curse that is distorting her memories, and the onset of a debilitating malady for which a cure may never be found. As a battle for the destiny of the world begins, the lady must make a fateful decision. If she reveals what she knows, she will liberate two worlds—or incite the downfall of everything she loves. 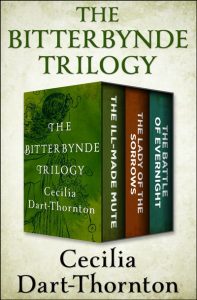 The Bitterbynde Trilogy: A beautifully spun fantasy of love, war, rebirth, and magical destiny, based on the haunting folklore of England, Ireland, Wales and Scotland.

“Riding upon the back of a waterhorse – what mortal had ever stayed in such a seat for so long? On a horse made of cold currents and liquid convergences, jests and trickery – pressed against a hide like the burnished sea of midnight, things look different to the rider.”

“Down the violet wind slid syrinx melodies, wild as foxes, mad as love, strange as wakening.”

~ Cecilia Dart-Thornton, The Battle of Evernight