“Fares from beneath a dim dragon flying,
a glistening snake from the Moonless Fells.
Fierce-stinger bears the dead on his pinions
away o’er the plains. I sink now and cease.”

From: The Poetic Edda.

“… after more than a hundred years, this book is finally back in print! It is almost exactly like the old Viking Club Edition – written in the original Old Norse with an English translation by Olive Bray and very fine illustrations by W.G. Collingwood. A very helpful glossary has been added at the end of the book. This book is a great introduction for anyone who is reading The Poetic Edda for the first time.

Read the original Old Norse verse, side by side with English translations.
The collection includes the archetypal stories about wise Odin, hammer-wielding Thor, mischievous Loki and the other gods and goddesses of Asgard.

The Poetic Edda, also known as The Elder Edda or the Sæmundar Edda is a magnificent and magical collection of thirty-four ancient Icelandic poems, featuring legendary characters such as the original Gandalf, Thorin, Oakenshield, Loki, Odin and Thor. It teems with elves and dwarves, and there’s a dragon called Fierce-stinger:

Professor J. R. R. Tolkien readily acknowledged his debt to this source. He was sixteen years old when the Viking Club of London published this beautifully illustrated translation by Olive Bray.

Readers of Tolkien’s work will easily spot his inspirations – the names of the dwarves in The Hobbit; riddle games; Mirkwood; the Paths of the Dead; an underworld creature being tricked into remaining above-ground until dawn, when sunlight turns him to stone; different races calling a single thing by various names, and more.

Illustrator W. G. Collingwood was an English author, artist, antiquary and professor. In 1897 he travelled to Iceland where he spent three months exploring the actual sites that are the settings for the medieval Icelandic sagas. His study of Norse and Anglican archaeology made him widely recognized as a leading authority, and his Art Nouveau-style illustrations for the Bray edition are rich with symbolism.

The Poetic Edda, the most important existing source on Norse mythology and Germanic heroic legends, is part of the literature that influenced Tolkien’s inner world, informing the creation of The Hobbit and The Lord of the Rings.

“Poetic Edda” is the modern attribution for an unnamed collection of Old Norse anonymous poems, which is different from the Edda written by Snorri Sturluson.

Several versions exist, all primarily of text from the Icelandic medieval manuscript known as the Codex Regius.

The Codex Regius is arguably the most important existing source of Norse mythology and Germanic heroic legends. From the early 19th century onwards, it had a powerful influence on later Scandinavian literatures. This was not only by way of its stories, but also by the visionary force and the dramatic quality of many of the poems.

The Codex Regius has also become an inspiring model for many later innovations in poetic meter, particularly in Nordic languages. It offers many varied examples of terse, stress-based metrical schemes that lack any final rhyme, instead using alliterative devices (words that start with the same letter) and strongly-concentrated imagery.

The Journal of English and Germanic Philology, Vol. 28, No. 4, Oct., 1929 reviewed Olive Bray’s translation of The Poetic Edda, stating:

‘Miss Bray’s work is eminently satisfactory: she possesses a scholar’s knowledge of the subject (though she was by no means a specialist in the field); and she had poetic ability of a high order. She nearly always succeeded in reproducing the poetry and the spirit of the old lays and she adhered to the metrical form; to do these things she did not hesitate to depart from rules of alliteration or sometimes to disregard alliteration entirely. ‘

The Journal of English and Germanic Philology 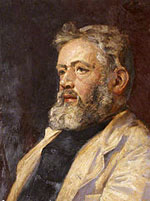 By the 1890s Collingwood had become a skilled painter and also joined the Cumberland and Westmorland Antiquarian and Archaeological Society. He wrote a large number of papers for its Transactions; becoming editor in 1900. Collingwood was particularly interested in Norse lore and the Norsemen, and he wrote a novel, Thorstein of the Mere which was a major influence on Arthur Ransome.

In 1897, Collingwood travelled to Iceland where he spent three months over the summer exploring with Jón Stefánsson the sites around the country in which the medieval Icelandic sagas are set. He produced a large number of sketches and watercolours during this time (e.g. the picture of the Althing), and published, with Stefánsson, an illustrated account of their expedition in 1899 under the title A Pilgrimage to the Sagasteads of Iceland (Ulverston: W. Holmes).

Collingwood was a member of the Viking Club and served as its president. In 1902 he co-authored again with Jón Stefánsson the first translation it published, The Life and Death of Kormac the Skald. His study of Norse and Anglican archaeology made him widely recognized as a leading authority.