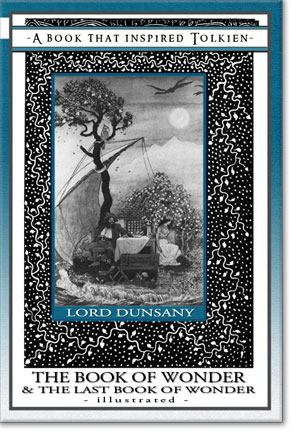 Lord Dunsany was a prolific fantasy short story writer whose books appeared around the turn of the 20th Century.

JRR Tolkien (author of The Lord of the Rings) mentions Dunsany’s works many times in his collected letters.
Tolkien was aged twenty when The Book of Wonder, illustrated by Sidney Sime, first appeared in bookshops and libraries.

Numerous accoutrements of fantasy are found within the realms of The Book of Wonder, as they are in Middle Earth; talismans, precious metals, jewels, horns, dark, dangerous woods infested with evil spiders and more.

A red, glowing, all-seeing eye opens above Dunsany’s frightening fantasyland, just as the Eye of Sauron glares across Middle Earth.

‘Tolkien’s letters and other sources for his life do not say very much about his recreational reading, but given his lifelong interest in literary fantasy and the parallels adduced above, one seems to be justified in suspecting that Tolkien was indebted to … Dunsany.’

Edward John Moreton Drax Plunkett, 18th Baron of Dunsany (24 July 1878 – 25 October 1957) was an Irish writer and dramatist, notable for his work, mostly in fantasy, published under the name Lord Dunsany.

More than eighty books of his work were published, and his oeuvre includes many hundreds of published short stories, as well as successful plays, novels and essays.

The stories in his first two books, and perhaps the beginning of his third, were set within an invented world, Pegana, with its own gods, history and geography.

Starting with this book, Dunsany’s name is linked to that of Sidney Sime, his chosen artist, who illustrated much of his work, notably until 1922.

This Professor’s Bookshelf edition contains the original illustrations, as seen by JRR Tolkien.

To shop for paperbacks, copy & paste 9781925110142 in the search box of your favorite bookstore (see links below).
If you don’t see this book there, ask them to order it for you.