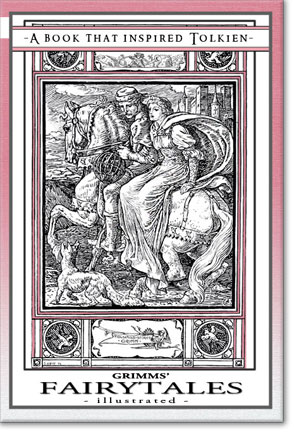 Professor J.R.R. Tolkien, author of The Lord of the Rings and The Hobbit, made specific mention of the brothers Grimm and their fairytales in his essay ‘On Fairy Stories’.

In his essay he mentioned his love of a tale by the name of ‘The Juniper Tree’ in The Red Fairy Book, renamed ‘The Almond Tree’ for British audiences.

Tolkien mined the folklore of the Grimm brothers for literary gems. Cecilia Dart-Thornton’s new introduction quotes Tolkien’s own words on the effect of fairy stories on the human mind.

“A number of motifs from the Grimms’ fairytales can be recognized in Tolkien’s work, especially in ‘The Hobbit’. As both Shippey and Anderson (‘The Annotated Hobbit’) point out, part of the episode of the three trolls in chapter 2 was inspired by ‘Der tapfere Schneiderlein’ [‘The Brave Little Tailor’], which appeared in the 1812 edition of ‘Kinder- und Hausmarchen’. Besides, Tolkien probably derived some elements of the Dwarves’s character and behavior from the tales of ‘Schneewittchen’ [‘Snow-white,’ also from 1812] and ‘Schneeweisscheo und Rosenrot’ [‘Snow-white and Rose-red,’ from the 1837 edition]. The influence of the Grimms’ tales can even be seen in The Silmarillion, with the episode of Luthien growing her hair in order to effect her escape, echoing the well known tale of ‘Rapunzel’.”

Two centuries ago Jacob and Wilhelm Grimm travelled through rural Germany together, collecting and publishing old, traditional folktales. They are now among the most well-known storytellers of German folklore.
Their first collection, ‘Children’s and Household Tales’, otherwise known as ‘Grimms’ Fairy Tales’, was published in 1812.

During the nineteenth century Europe, Britain and the British colonies experienced a flowering of Romanticism in the form of art, architecture, poetry, literature, folklore and folk tales. The latter, in particular, played a major role in the development of Tolkien’s Middle-earth mythology.

The 1882 English translation of Grimms’ Fairytales was beautifully illustrated by Walter Crane. Like William Morris, another of Tolkien’s favourite fantasy authors, Crane was an influential member of the Arts and Crafts movement.

This edition by The Professor’s Bpokshelf, a close replica of the original, contains more than 180 of Crane’s pictures, embellishments and ornate initials.

‘Certain artists did provide visual sources for Tolkien’s writing, particularly in their illustrations for the fairy tales that so appealed to him.’

So writes Mary Podles in her article ‘Tolkien and the New Art: Visual Sources for “The Lord of the Rings”’.

‘Crane illustrated a version of “Grimm’s Fairytales” that may in several instances have inspired specific scenes and incidents in “The Lord of the Rings”. Often Crane added details to his black-and-white illustrations that were not in Grimm, but proved to be the very ones that stuck in Tolkien’s memory and resurfaced in his novel.’

Crane’s illustrations for the fairytales that Tolkien read as a boy do justice to the richness, strangeness and beauty of the folklore which fired the imagination of the author of ‘The Lord of the Rings’.

To shop for the paperback edition of Grimm’s Fairytales, copy & paste 9781925110166 in the search box of your favorite bookstore (see links below).
If you don’t see this book there, ask them to order it for you.